Fire seals are used to manifest your wants, wishes & desires.

Sacred Seals ( markers of the absolute )

Apart from their mystical qualities; these sacred seals symbolize the link between science, beauty and metaphysics, with elements of medicine and magic, astronomy and astrology”. I do know these seals are well-known within the spiritual community as sources of great wisdom and power, if not the greatest. Our elders say that possessing a sacred seal is equivalent to having a genie in a bottle.

We use these ancient Seals \  Seals from God to enhance our Fire spells. The Fire spells are created by crafting a spell into script form so they can be enhanced with sacred seals (markers of the absolute) and placed upon our fire alter so they can be released into the ethers during our fire ceremonies. We will be selling these ancient Seals \  Seals from God in script form very soon !!!

The power of ancient Seals or Seals from God are well chronicled is the Testament of Solomon. the Testament portrays him as great in wisdom, wealth, and power beyond any of the kings of earth.

The ancient ones prayed to God for help, who answered thier prayers by sending them visions of symbols and or sacred scriptures that they could engrave on items to create charms that could hold or channel divine powers and bring blessing of favor, protection, luck and good fortune to its bearer.

Many of those ancient symbols can be found today in the geometric amphtuhedron which is at the center of the modern day Quantum Mechanics. (The amplituhedron is a geometric structure that was just introduced in 2013)

As mentioned earlier, the best account of the powers of these sacred seals is told by king solemn. Solomon then prayed to God for help, who answered the king’s prayers by sending him a magic signet which had an engraving of a pentagram on its seal,

“And it came about through my prayer that grace was given to me from the Lord Sabaoth by Michael his archangel. [He brought me] a little ring, having a seal consisting of an engraved stone, and said to me: "Take, O Solomon, king, son of David, the gift which the Lord God has sent thee, the highest Sabbath. With it thou shalt control spirits;  And with their help thou shalt build up Jerusalem.

[But] thou [must] posses this seal of God. So as stated in the bible King Solomon became greater than all the kings of the earth in riches and in wisdom, thus testifying to the true powers of these seals.

These divine symbols are also found in the ancient Hindi symbols of the Merkabah and Sri Yantra.

The Sri Yantra known as "creation," holds the key to transformation and is believed to be around 14,000 years old. The point here is that these symbols have held their value throughout the ages and these seals (their symbols) are still in use today. 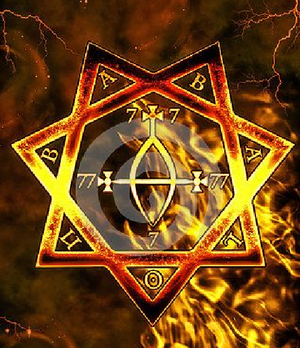